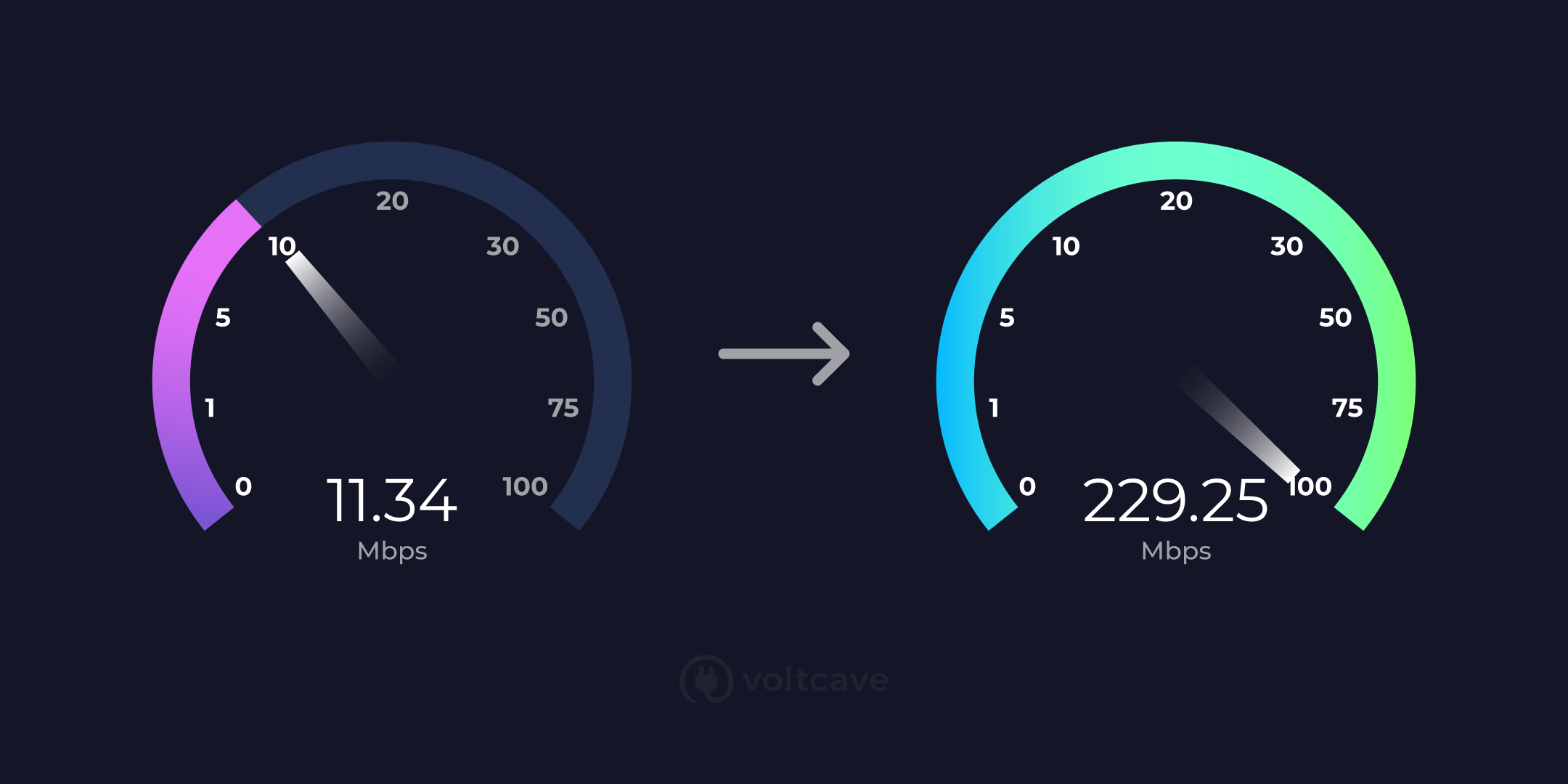 Whether it’s for work or play, having a fast and reliable internet connection has become necessary for modern living. If you’re frustrated by a slow connection or lag and want to know how to speed up your internet, you’ve come to the right place.

Of course, nothing will replace upgrading to a faster plan from your internet service provider (ISP). That’s a guaranteed speed boost that we recommend if it’s a viable choice. But if that isn’t an option for you, we’ve ranked the most effective ways to improve your internet speed. 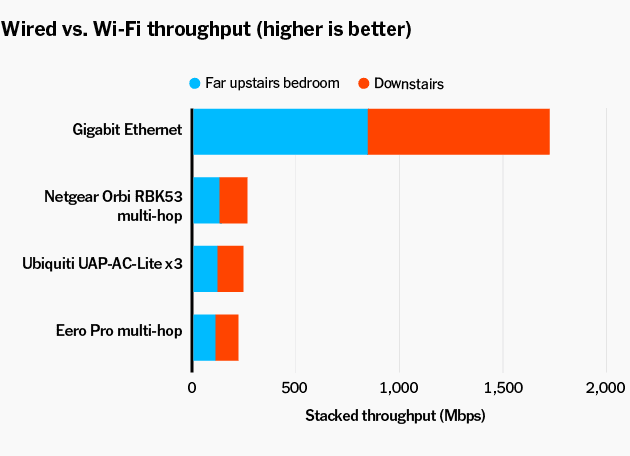 An Ethernet cable isn’t the most ground-breaking solution, but it’s still the most effective way to maximize internet speed and stability. There are a couple of reasons. For one, Ethernet is just plain faster than WiFi, as demonstrated in the image above. Secondly, a wired Ethernet connection completely sidesteps common WiFi issues such as dead zones, interference, and crowded WiFi bands.

Sure, the idea of running a long cable might seem like a hassle compared to WiFi, but Ethernet doesn’t lose speed the further you are from the router. A 100-foot Ethernet cable is inexpensive and will perform better than WiFi once you get past 30 feet or so. 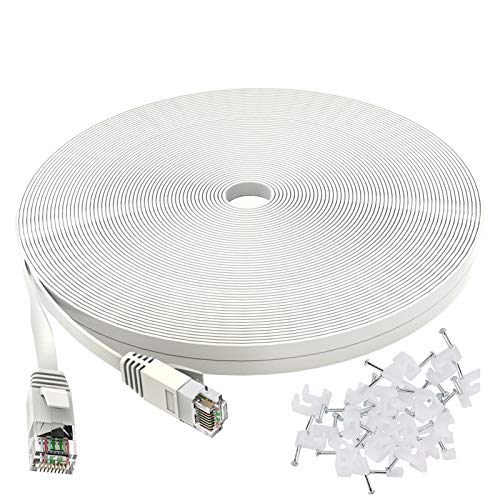 The downside, of course, is that this won’t be suitable for all your devices. Game consoles, desktop PCs, smart TVs, and other bandwidth-hungry devices that stay in place are perfect candidates for wired connections. Smartphones, not so much.

2. Use a Powerline Adapter

Really don’t want to run an extra-long Ethernet cable? The next best option is a powerline kit, which uses your home’s electrical wiring to essentially transforms your power outlet into an ethernet port. All you do is connect a powerline adapter to your router and then plug it into the wall. A second adapter unit simply plugs into the wall wherever you need the stronger signal. 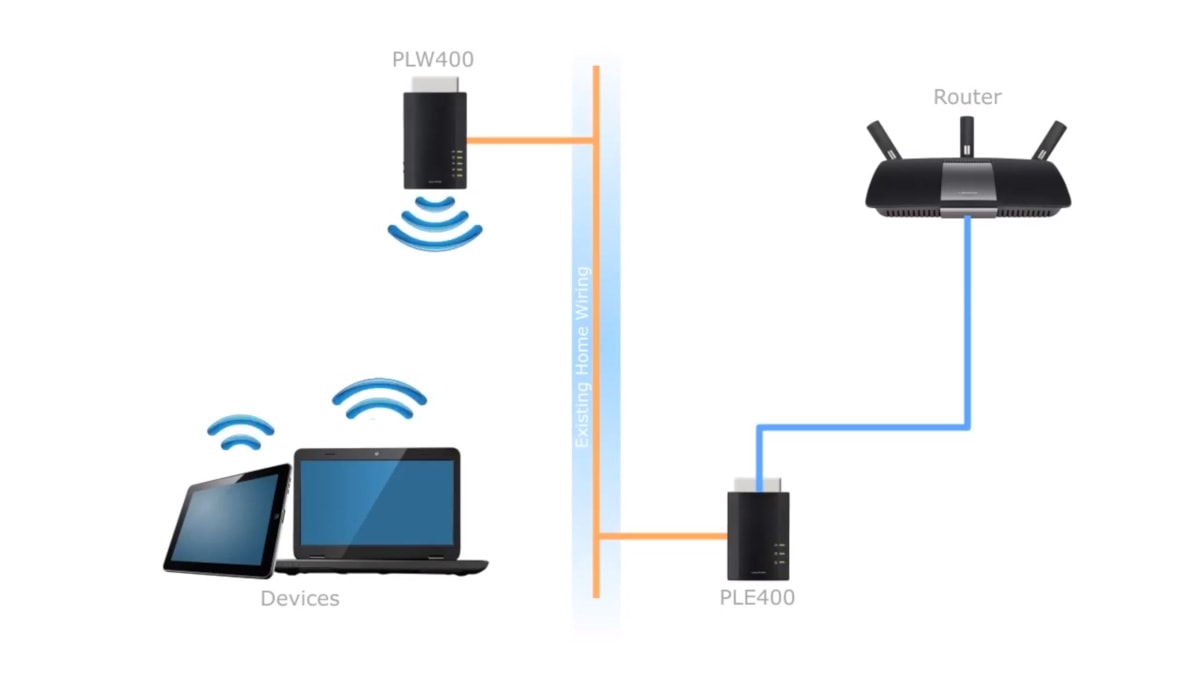 Some powerline adapters even have WiFi, making for a seamless experience. TP-Link makes a well-reviewed, WiFi-equipped powerline kit that should serve you well. 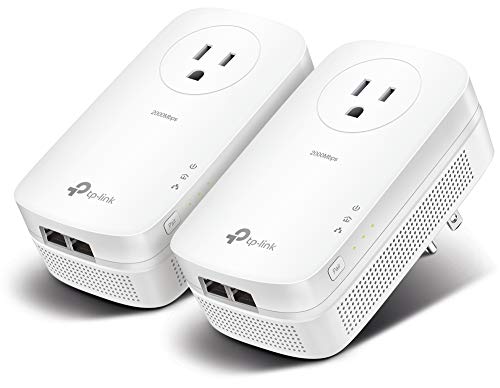 Powerline has an advantage over WiFi since you won’t have to worry about WiFi-blocking obstacles and your router’s range. Amateur tests have shown that powerline kits can outperform WiFi at long distances, too, making them a great option to improve internet speed overall.

However, not all homes will have the right sort of wiring to support powerline kits. Most modern homes should be fine, but there doesn’t seem to be any way of knowing for sure beyond buying a set and trying it out yourself. It’s probably a good idea to buy from a retailer with a good return policy just in case.

If neither Ethernet nor powerline are viable and you just want to know how to speed up your WiFi, you can try repositioning your router. WiFi has a limited range, and physical obstacles like concrete walls, metal, tiles, and water will reduce it even further. Of course, knocking down walls to increase internet speed probably isn’t an option. But you can reposition your router to bypass these obstacles. 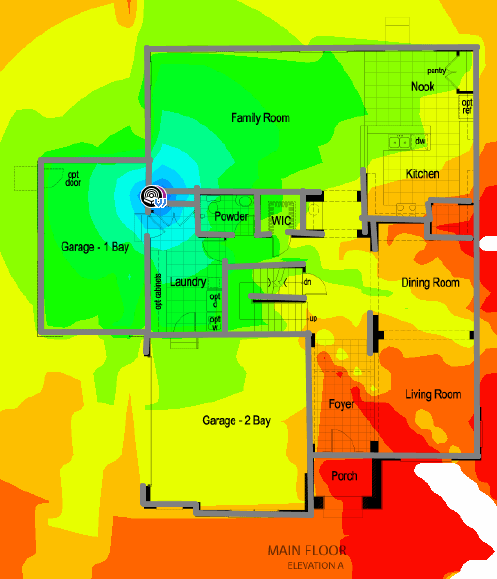 There are two ways to go about this. If you want to improve overall signal quality, move your router to a central position in your home. WiFi signals broadcast in all directions from your router, and a central location will take maximum advantage of that. If you live in a two-story house, elevate your router as that’ll help WiFi signals reach the second floor better.

You can also try moving one or two of your router’s antennas into a horizontal position to improve second-floor WiFi quality. Antennas broadcast more along their horizontal axis, so laying them flat should improve the signal upstairs. 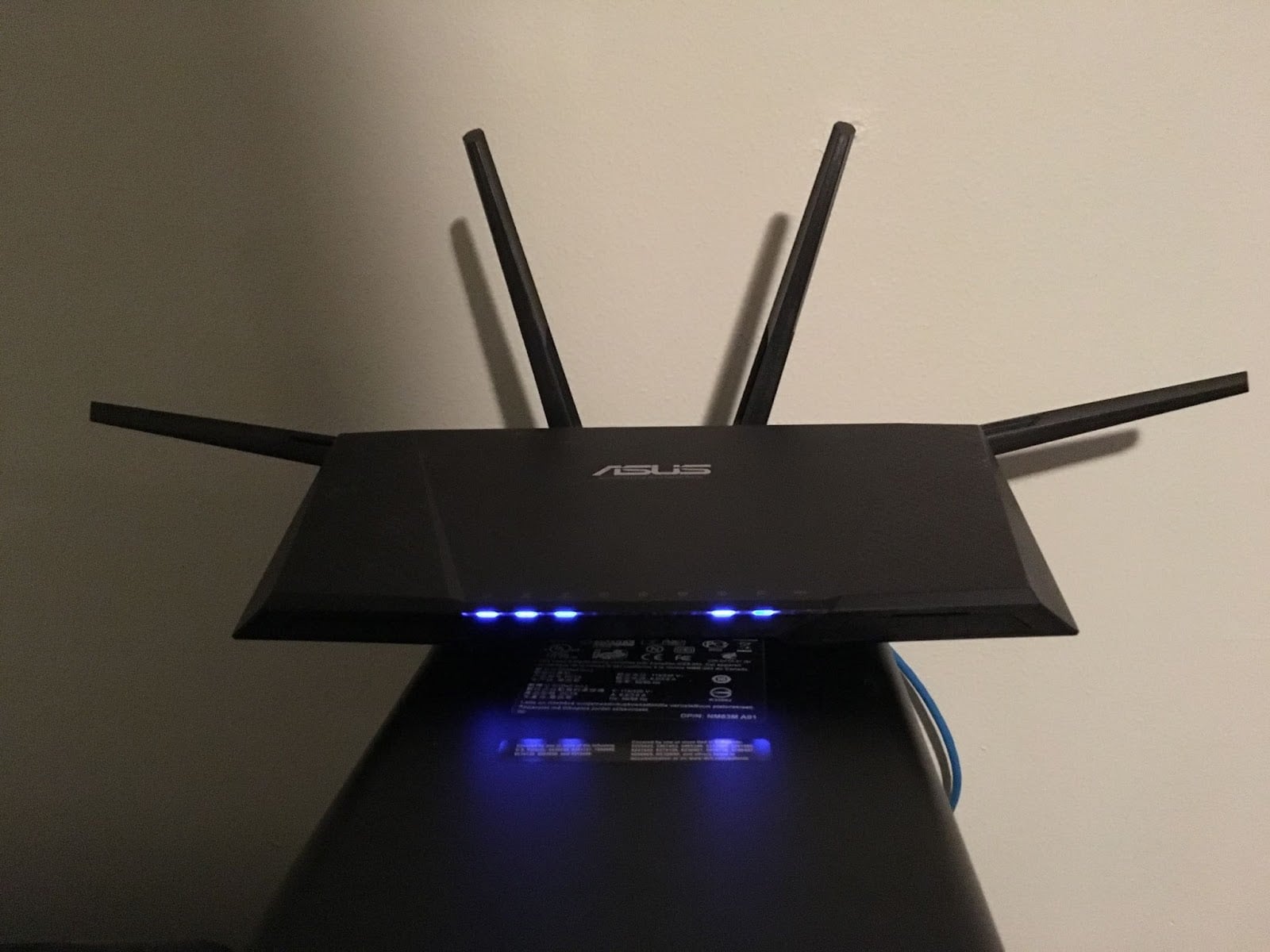 Note that WiFi is fastest when devices are close to the router and have a clear line of sight. So, try to find a central position that’s also close to your bandwidth-hungry electronics. It’s not as straightforward as just chucking your router in a corner, but it’ll be worth the effort for better speed and coverage.

Moved your router but still can’t get enough coverage all over your home? You’re going to have to extend your WiFi range. The most effective way to do this is by upgrading your router.

You have two choices here: upgrade to a high-quality, long-range router or set up a Mesh WiFi system.

Long-range routers like ASUS’ RT-AC88U have four antennas (or more) and utilize technologies such as beamforming to improve WiFi signal strength and coverage. ASUS claims a maximum range of 2500 square feet for the RT-AC88U, which is plenty for an apartment or average home.

If you live in a house that’s more than 3000 to 3500 square feet or has more than two floors, you’ll probably need to look into Mesh WiFi instead. Mesh WiFi systems consist of a base router that connects to your modem and multiple nodes that spread your WiFi signal.

Mesh WiFi nodes transmit data to each other using mesh technology, leaving your 2.4 and 5 GHz WiFi bands free for your devices. You won’t have any speed issues with Mesh WiFi, unlike the WiFi repeaters we discuss later on. 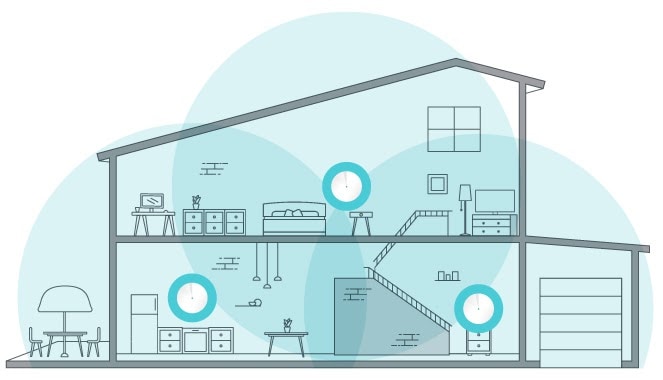 Google’s Nest WiFi system is a solid option if you’re interested in making the upgrade to Mesh WiFi. It’s one of the most stylish and user-friendly Mesh WiFi systems around. 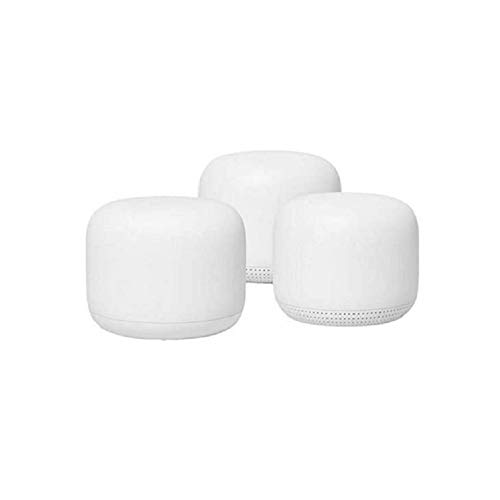 While we’ve linked the three-pack set, you can buy a cheaper two-pack if you don’t think your house needs the extra node.

Another benefit of upgrading your router is newer WiFi technology. Depending on your internet speed, an old (WiFi 4 or earlier) router may be holding you back. Upgrading to a more up-to-date WiFi 5 or 6 router should unlock extra performance, just so long as your devices support these newer protocols.

A lack of WiFi 5 or 6 support on your desktop holding you back? Check out our list of the best PCIe WiFi cards for some options to bring your rig into the modern wireless age.

Is replacing your router too much of an investment? Then you might be interested in the more affordable option of extending your internet coverage using WiFi repeaters.

WiFi repeaters are an easy way to boost your WiFi signal. Repeaters extend your router’s WiFi range by capturing, amplifying, and rebroadcasting its signals, which can help bring WiFi to distant corners of your house. Unfortunately, this comes with a penalty to internet speed since repeaters have to send data to both your devices and your router at the same time.

Some repeaters are faster than others, but there will always be some speed loss vs. a direct link to your router. This makes them a poor choice for gaming rooms and anywhere else where speed is critical. You’ll want a wired Ethernet connection or powerline for those situations.

That said, having a more stable connection can help make for a faster overall internet connection since you’re not losing connection as often. If you just want to boost your WiFi signal for phone usage in the bedroom or attic, a repeater might be an adequate solution.

Modern WiFi routers transmit on two frequency bands: 2.4 GHz and 5 GHz. 2.4 GHz is slower, with a maximum speed of around 400 to 600 Mbps with WiFi 5 in ideal conditions. 5 GHz tops out at around 1300 Mbps on the same protocol.

Aside from the slower speeds, 2.4 GHz is also a much more crowded frequency. Everything from microwave ovens to baby monitors and garage door openers uses 2.4 GHz, so there’s a high likelihood of signal interference.

5 GHz is a newer frequency band and isn’t used as heavily. However, 5 GHz signals don’t travel as far as 2.4 GHz signals, so you need to be within line of sight of your router for maximum performance. 2.4 GHz travels much further, making it ideal for devices far away from your router. 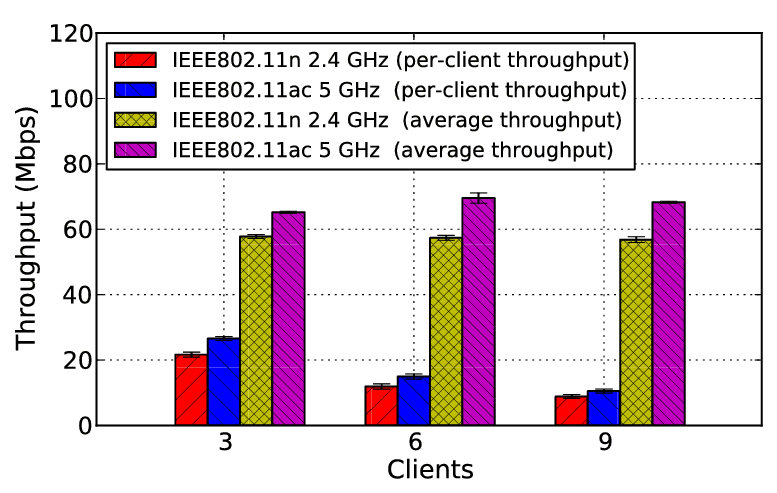 Problems arise when you end up with mismatched connections, like having far-away devices connected to 5 GHz when the Xbox next to the router connects via 2.4 GHz. Connecting your devices to the right band will help increase speeds and reliability and offer a much smoother WiFi experience overall.

Another detail to check is WiFi channels. Routers usually select channels automatically, but they may not always make the optimal choice. Specific channels may be more crowded than others, which will impact WiFi speeds.

You can use smartphone apps or computer programs to analyze WiFi channels and find the best one for your network. Let’s try running an Android app called WiFi Analyzer. Here’s what I get at home:

The different-colored areas represent different WiFi networks, and the numbers across the bottom indicate WiFi channels. This particular WiFi analyzer app also shows the channel number after the SSID.

My 2.4 GHz WiFi is the light blue network on channel 11. It’s a bit crowded up there, so I might consider switching to channel 1. My WiFi is OK as it is, though, so it’s not a priority in my case.

But if you’re facing WiFi issues and notice that your network is duking it out with a whole bunch of others, log in to your router and change channels. We can’t tell you how to do this exactly, as each router’s firmware is a bit different. Your user manual should have the info you need. 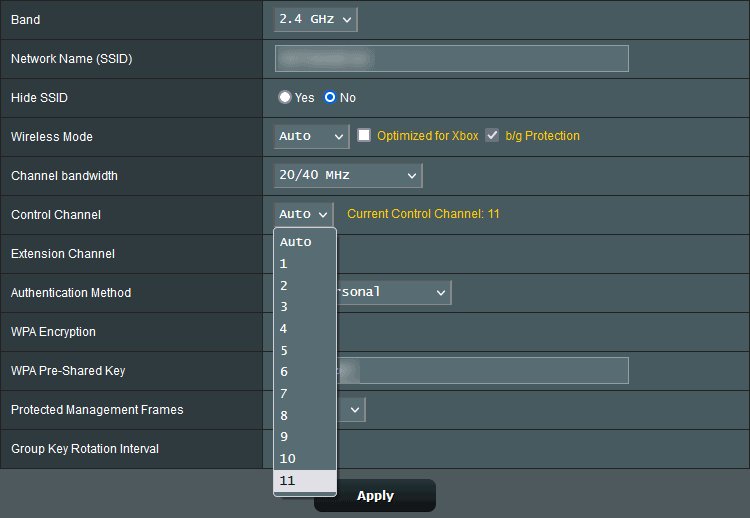 Changing WiFi channels won’t turn a slow internet connection into a blazing-fast one, so don’t expect miracles. Still, moving over to a freer channel will cut down on interference and improve speed and stability.

This is last on our list because it’s probably not the main reason for slow internet. Still, leaving your WiFi unsecured is an invitation for “guests” to help themselves to your bandwidth for torrenting or Netflix binges.

To avoid that and keep your bandwidth all to yourself, make sure you’ve got WPA2 authentication enabled on your network.

The Need For Speed

Slow internet is frustrating, but you don’t have to live with it. Even if you don’t have the option of switching plans or ISPs, the methods we’ve described here should help boost your internet speed.

Switching to a wired Ethernet connection is undoubtedly the best option to improve internet speed, which is why it’s number one. But if that’s not an option, you should still see some improvement with our other suggestions. Let us know which method works best for you! 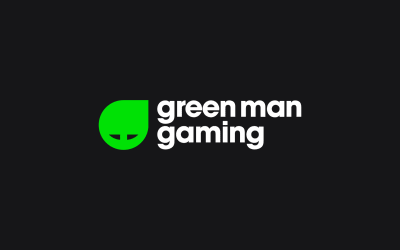 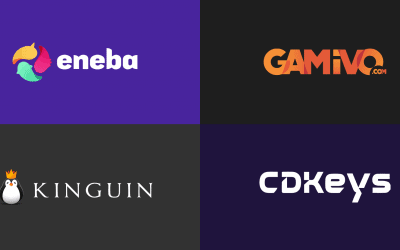 Unofficial game key sites rarely have a spotless record. But between bribing journalists and selling fraudulent keys, G2A’s is downright dirty. Gray market sites like G2A can be problematic for a number of reasons, but we can't deny they’re also where you’ll find the...