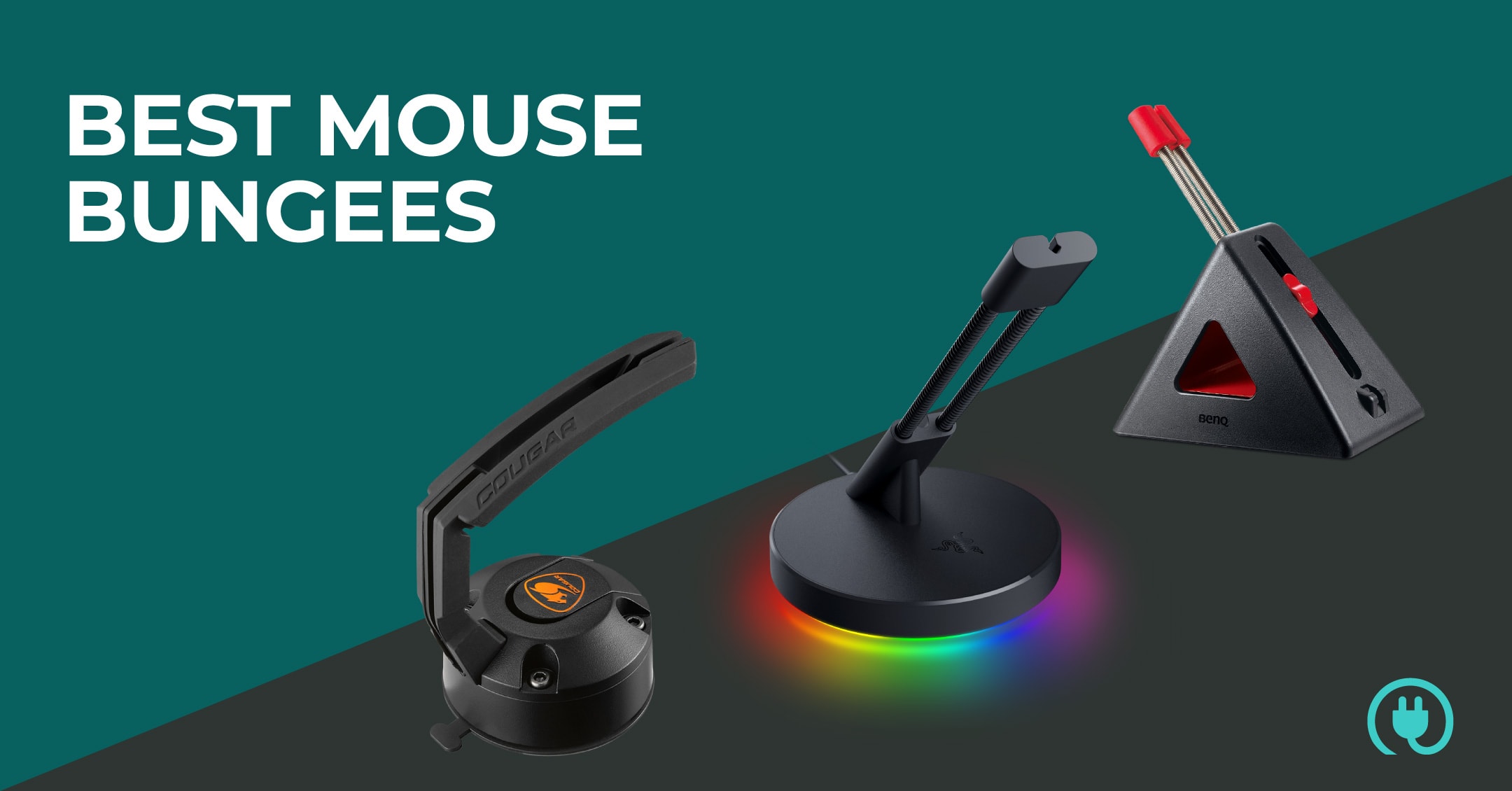 When we think of essential gaming accessories, a mouse bungee doesn’t immediately come to mind. But having the best mouse bungee on your desk can be the difference between winning and losing. Just ask anyone who’s missed a shot because of cable drag or died when their mouse cable got caught up on something.

In a heated match, it’s the little things that matter. It’s essential to get rid of as many distractions and inconsistencies as you can, and a mouse bungee does precisely that for your aim. Interested? Let’s take a look at our choices for the five best mouse bungees available now.

Our Picks For Best Mouse Bungees

Before we get into this list, it’s worth noting that mouse bungees aren’t all that different. Most reputable brands’ offerings will do equally great jobs, with the most significant differences often being aesthetic. There are also one or two minor details that set them apart beyond their looks, but all in all, this isn’t a list with any right or wrong choices. You know a company’s been doing something right when their product sells enough units to justify three revisions. Razer’s Bungee V2 was well-loved, and Razer has wisely chosen to stick to the same general style for the updated model.

The changes between V2 and V3 are primarily aesthetic. Gone is the angular design of the previous models. Instead, the Bungee V3 sports a rounded base and a slightly softer look to the spring arm supports.

Other than that, the V3 looks to have the same high-quality coated springs as the V2. Coated springs might not seem like a big deal, but the coating ensures the spring stays rust-free. Rust won’t really affect performance, but it’s not pleasant to look at, so kudos to Razer for keeping the coating. If you’re an RGB nut, Razer also has the Razer Mouse Bungee V3 Chroma available. It’s slightly more expensive, but the extra cost is a pretty small price to pay if you’re committed to the RGB lifestyle.

The basic Bungee V3 and the Bungee V3 Chroma both weigh in at 8.5 oz, and the weighted base has a non-slip surface on the bottom. Zowie is a name synonymous with high-performance, professional-grade mice. So it’s really no surprise that they would have a mouse bungee in their product lineup, and a great one at that.

From the hulking triangular base to the red cable collar, the CAMADE II is designed to stand out on your desk and look imposing when it’s there. Aesthetics aside, the standout feature of the CAMADE II is the adjustable spring length. There are three length settings, allowing you to have the cable collar 4.1, 5.0, or 6.2 inches off your desk.

It’s the sort of feature that tells us Zowie tried to think of as many users as possible when designing it. That’s a good thing in our books. A positive side-effect of the adjustable arm length is that it makes transporting the CAMADE II a bit safer. You can just shorten the arm and chuck it into your bag, reducing the chances of damaging or bending the springs.

Zowie’s CAMADE II weighs 13.4 oz. The weighted base has anti-slip rubber feet to make sure it stays put even when you do huge mousepad-crossing flicks. Need RGB for less than the Razer Mouse Bungee V3 Chroma? Casethrone’s got you covered. At only a shade above the price of the basic Bungee V3, Casethrone’s RGB Pro offers four different RGB light modes controllable via touch control.

The RGB Pro has a single-color always-on mode, a breathing single-color mode, a full RGB mode, and a “music” mode that reacts to sound and music coming out of your speakers. The RGB Pro can’t compete with the game integration and Chroma Studio that Razer’s RGB bungee offers, but that comes with the bonus of not needing any software to control lighting.

Looks-wise it’s relatively similar to the CAMADE II with its triangular base. It’s not as tall as the CAMADE II, though, and lacks the former’s adjustable spring length. It is, however, broader and longer, which probably contributes to the 15.2 oz weight. Cougar is known primarily for its outlandish PC cases. So, it makes sense that the company would go a slightly different path with its mouse bungee. Unlike the other bungees on this list, which use a combination of weighted bases and anti-slip rubber feet to stay in place, Cougar opted to add a suction pad to the bottom of the Bunker.

Cougar claims that this “patented” suction cup design even works on “slightly uneven” surfaces. The benefit of the suction cup system is that the Bunker doesn’t need a big, weighty base to add stability. It has a compact footprint and weighs a shade under 3 oz, making it a great LAN party bungee.

The Bunker also differs from most other bungees when it comes to the arm itself. It’s made out of flexible rubber instead of the slightly fragile spring arms that other manufacturers use. It likely won’t have any noticeable effect on performance, but it further adds to its LAN party readiness. Cougar also has an RGB version of its mouse bungee available. The Cougar Bunker RGB is pretty pricey for a bungee, but it’s the only one with RGB and that suction cup. If you like the combination, the Bunker RGB is the only game in town. Let’s get it out of the way first: the Enhance Pro isn’t the best-looking bungee you’ll ever see. If you thought bungees like the Zowie CAMADE II or Cougar Bunker were already too “gamer,” then you’ll hate the Enhance Pro.

If, on the other hand, you can’t get enough of flashy, busy gamer-y designs, then the Enhance Pro is going to be right up your alley. From the circuit board motif on the base to the LED lighting and chunky rectangular protrusions, the Enhance Pro will stand out on any desk. Whether that’s a good thing will depend entirely on your preferences.

The Enhance Pro lands on our list because it’s also a four-port USB hub. It’s a great one-stop peripheral for connecting all your gaming gear. You can even remove the spring arm and use it solely as a USB hub if you so desire.

Like the other bungees on our list, the Enhance Pro is built with a non-slip base. At 7 oz, it’s on the lighter side of things. It’s worth noting that almost half of that weight comes from a 3.7 oz metal disc. That tells us the Enhance Pro is probably built out of relatively thin plastic.

Thin plastic doesn’t bode well for long-term durability, especially if you’re planning to throw it in a bag to take to LAN parties and the like. But it’ll probably be fine for normal use on your desk.

Are Mouse Bungees Worth It?

Usually, we’d discuss the most critical specs or features to consider when shopping for a device or peripheral here. But mouse bungees are pretty simple to shop for. Just get one with a flexible arm that you like the look of. Beyond that, it’s all personal preference, and one person’s must-have feature is another person’s unnecessary, frivolous one.

Instead, let’s quickly discuss whether it’s worth buying a mouse bungee.

Let’s be clear: a mouse bungee won’t make you a better gamer, and none of the products on our list will magically improve your aim. You won’t suddenly hit all those headshots you’ve been missing the moment you start using a bungee. Why get a bungee, then?

By providing a raised anchor point and a fixed amount of cable slack, bungees greatly reduce (or eliminate) any effect the cable has on your aim. Your mouse cord won’t get snagged on anything, and neither will unmanaged cable slack pull on your mouse. Raising the cable slightly above your mousepad also reduces cable drag, helping your aim feel even smoother.

In our experience, a mouse bungee can make you forget that you’re using a wired mouse. Aiming just feels more consistent and effortless when your cable isn’t getting in the way.

On the topic of consistency, don’t forget to disable mouse acceleration. Mouse acceleration messes with your aim by increasing your mouse pointer’s speed the faster you move your mouse. It might seem helpful on paper, but it makes aiming an inconsistent affair. It’ll take a while to adjust to non-accelerated (or raw) input, but your game will benefit in the long run.

Combine a mouse bungee, raw input, and a clean mousepad, and you have a recipe for consistent aim day in and day out.

Ready To Stop Blaming Your Cable?

Mouse bungees are simple but effective accessories that we think no hardcore gamer should be without. Out of all the best mouse bungees on the market right now, we like the non-Chroma Razer Mouse Bungee V3 the best. The restrained design and all-black color scheme are right up our alley. But you can’t go wrong with any of the choices on our list, really.

If you’ve never used a bungee before, we think you’ll find it a surprisingly enjoyable addition to your desk. Using one won’t magically take you to Global Elite in CS:GO, but it can help set the stage for that slow grind to the top. The rest is up to you. 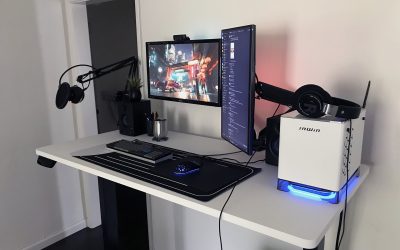 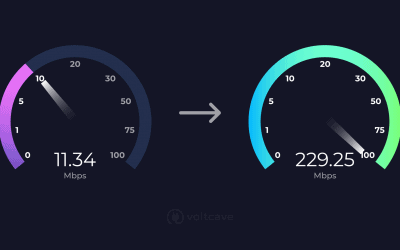