How Many Fans Should a PC Have? (Testing Results) 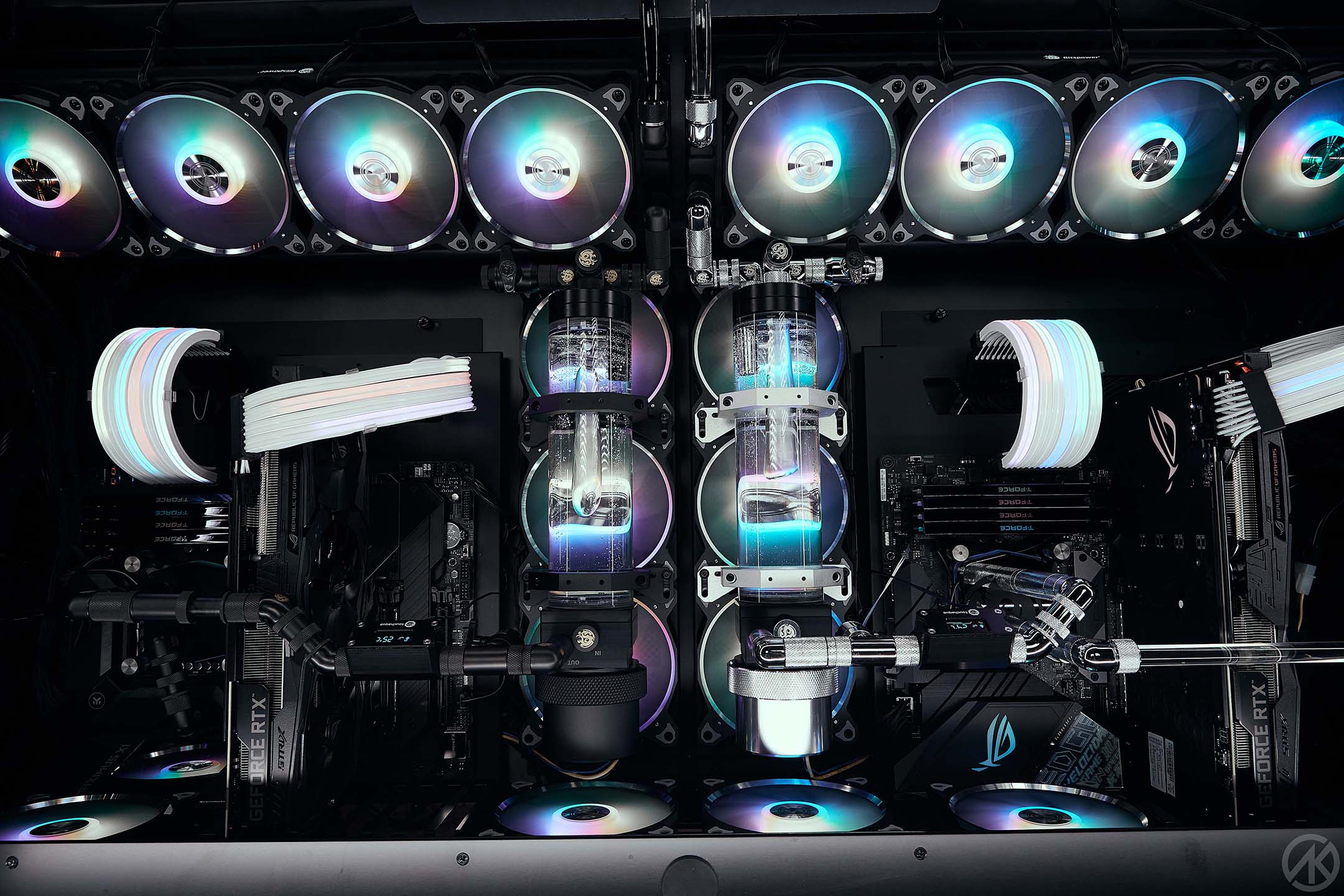 Trying to optimize your rig’s airflow? A big part of that is installing a suitable number of fans; enough to cool your components without going overboard and wasting money. In this guide, we’ll go over testing results to help you find that right balance and answer the question, “how many fans should a PC have?”

How Many Case Fans Do I Need?

Two front intakes and one rear exhaust fan is the fan setup we’d recommend starting with, as it offers good cooling performance at an affordable cost. It’s a case of diminishing returns after that, so you’ll want to start there and add fans only if it feels necessary.

When installing fans, remember that case airflow tends to go from front-to-back and bottom-to-top. Check out our guide to optimizing PC airflow for more information.

If you’ve spent time browsing other people’s gaming PCs, you’ve likely come across builds that populate all of the fan mounts in the name of cooling. It often looks something like this, although it can get crazier: 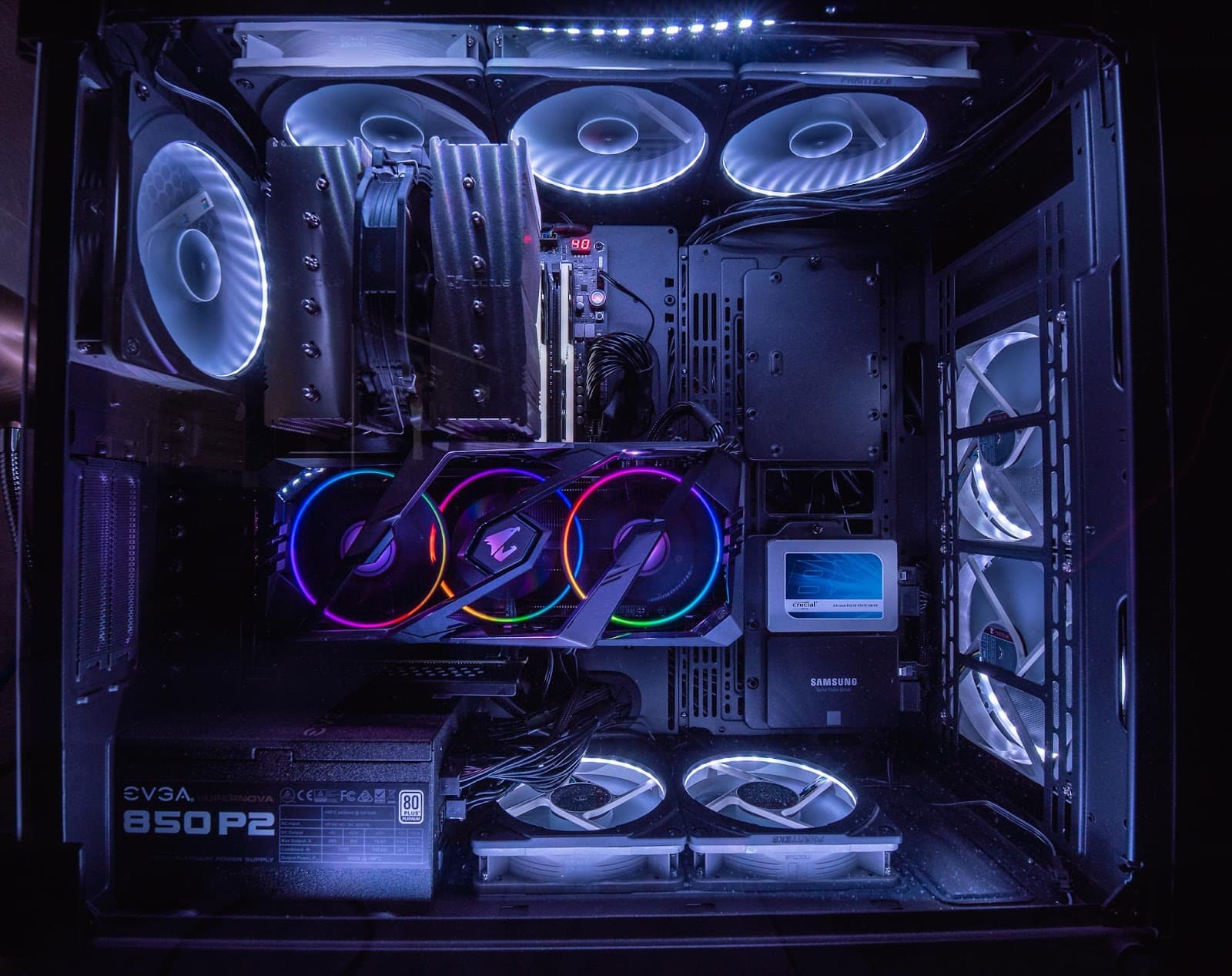 You’d be forgiven for thinking that this is a good idea; after all, more PC fans mean more cool air, which means cooler temperatures, right? Not exactly.

In fact, we’d argue it’s a waste of money if you’re already running an airflow-friendly case like the Phanteks P400A. Unless you’re using a case with particularly poor airflow, you’ll likely find that you don’t need nearly as many cooling fans as you think.

The question of “how many fans does a gaming PC need?” is one that tech outlets and YouTubers have asked and answered a few times over the years, which means we have some objective data to refer to. Let’s go through some test results and see what they found.

First up is everyone’s favorite, good old Linus Tech Tips. They tested case fan setups back in 2015 with an Intel Core i7-6700K and a Gigabyte Windforce R9 290 in an old Cooler Master MasterCase 5: 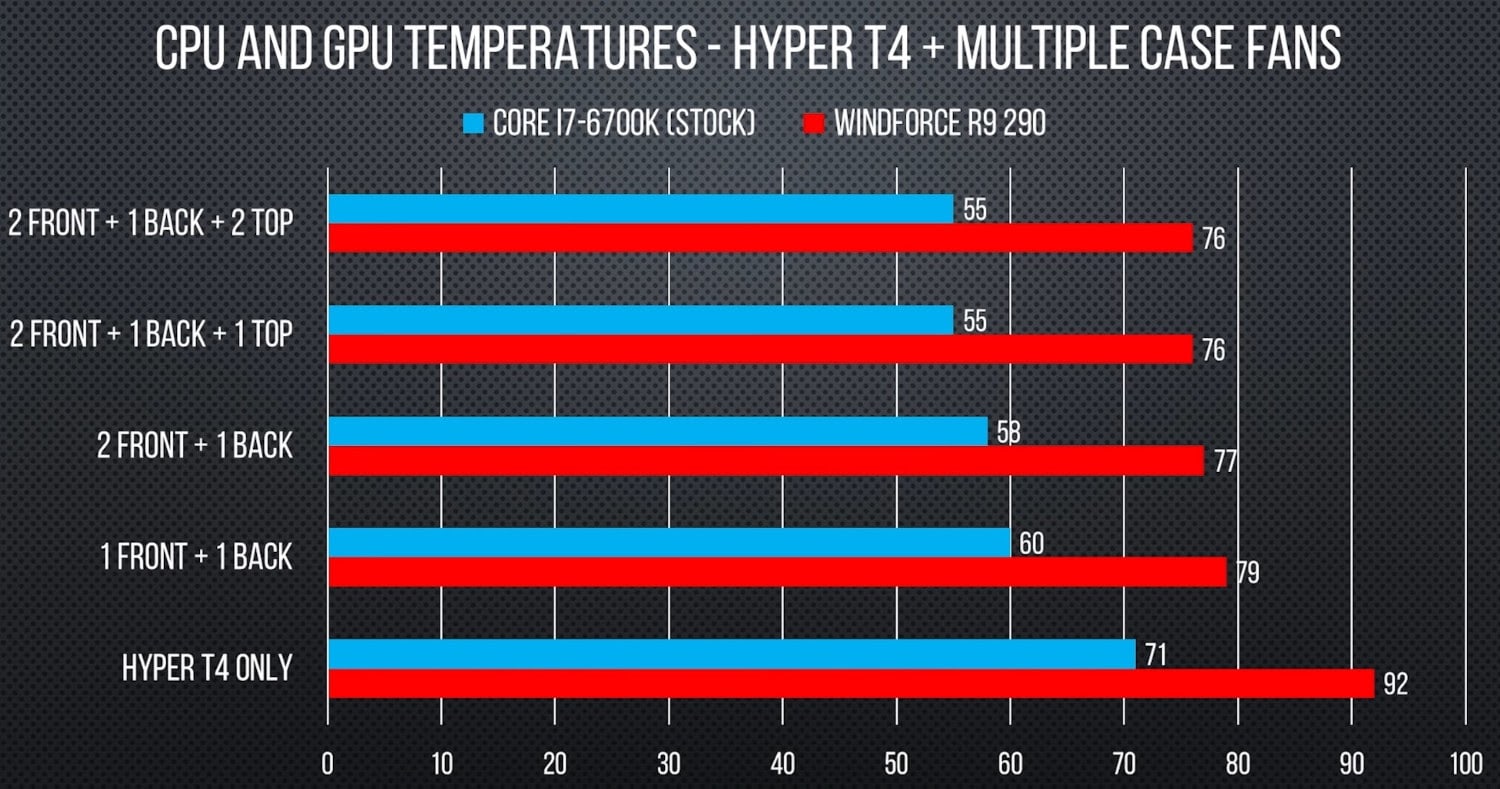 The biggest improvement was from zero fans to a single intake and exhaust setup, significantly reducing CPU and GPU temperatures. Gains after that are relatively minimal, with the classic two-intake, one-exhaust setup’s 58 and 77 degrees Celsius on the CPU and GPU arguably the best balance overall.

Let’s move on to Hardware Canucks’ testing. They tested an Intel Core i7-8700K and Zotac RTX 2060 Super in a be quiet! Pure Base 500DX and again found that two front intakes and one rear exhaust offered the most balanced cooling performance of the setups they tested—75 and 73 degrees Celsius on the CPU and GPU, respectively.

Interestingly, Hardware Canucks found no benefit in adding extra intakes or exhaust fans with their setup. There’s a single degree Celsius reduction in CPU temps from 75 to 74 degrees by adding two top intake fans, but that’s a poor return for the cost and hassle of wiring up two extra top intakes. All other setups resulted in worse temperatures on one or both of the components vs. the two front, one rear arrangement.

Tech YES City’s case choice is slightly notable, as it has motherboard tray-mounted intake fans like the Lian Li O11 Dynamic. This is unlike the front-mounted intakes on the Cooler Master and be quiet! cases used by LTT and Hardware Canucks.

That said, the results are broadly similar for both CPU and GPU temperatures. For the 9900KS, the biggest improvement was from adding one exhaust fan, which reduced average temperatures from 79 degrees Celsius to 74.2 degrees. Moving up to two intakes dropped temperatures to 73.5 degrees, while enabling all five intakes (two tray, three bottom intakes) only dropped them down a further 0.4 degrees Celsius. 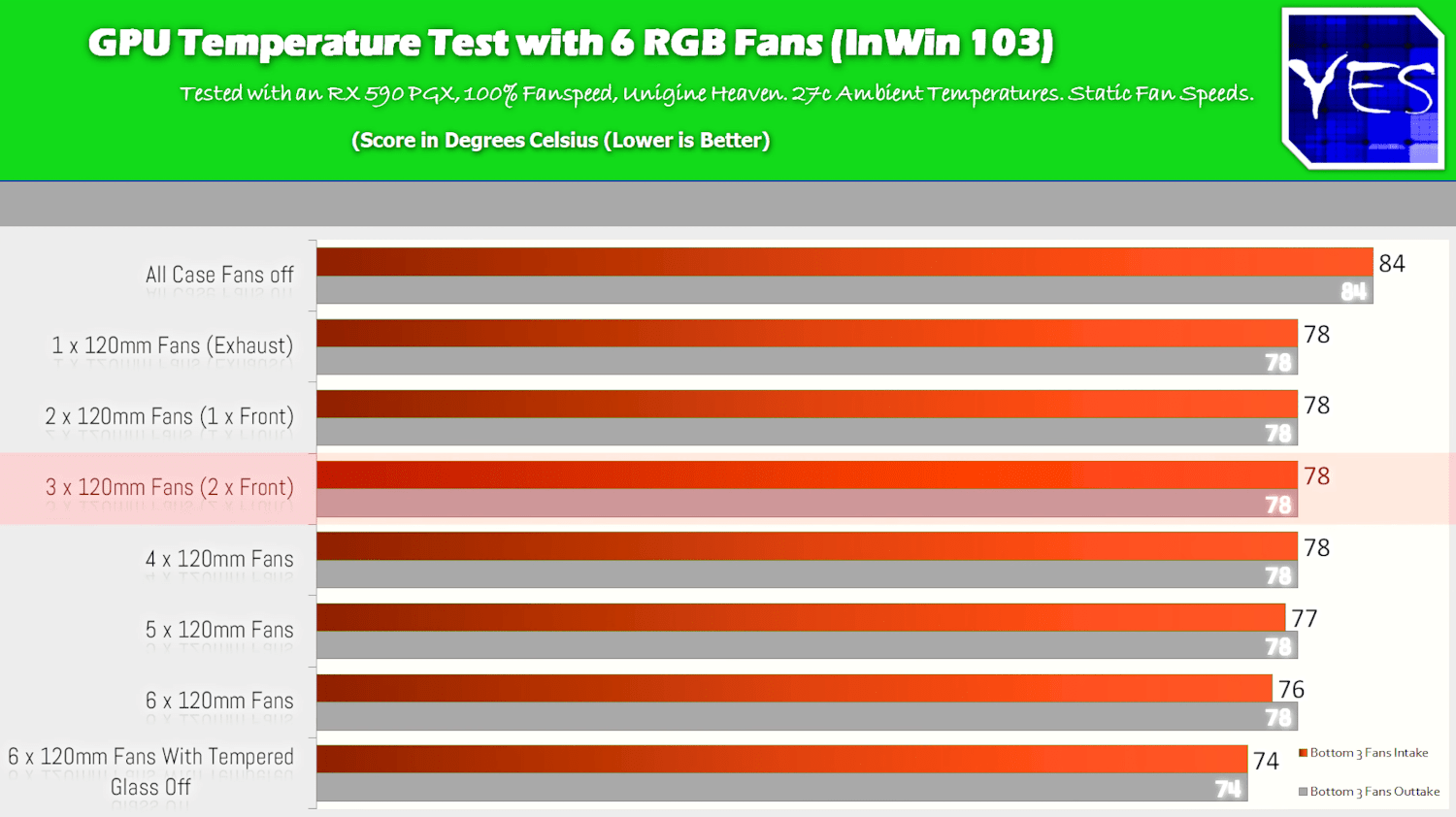 GPU temperatures are similar in that the biggest improvement is from no fans (84 degrees Celsius) to a single exhaust fan (78 degrees Celsius). After that, it takes four intake fans to see a single degree reduction, with another degree Celsius drop once all five intake fans are running; arguably not an effective way to spend your money.

It’s worth noting that the InWin 103 has relatively restricted side intakes and isn’t a “traditional” airflow case. This might have something to do with that significant plateau in GPU temperatures between the single-exhaust and the four-intake, one-exhaust setups.

So now that we’ve looked at a bunch of numbers, there are a couple of core takeaways that can help answer the question, “how many fans should a PC have?”.

Firstly, any fans are better than no fans. Both LTT and Tech YES City recorded their most significant CPU and GPU temperature drops when moving from zero fans to a single exhaust (and intake fan, in LTT’s case). So even if you’re on a tight budget, try to install an exhaust fan at least.

Secondly, the two-intake, one-exhaust setup seems to be the best middle ground for case fans. Start with three fans and see how your temperatures are. If satisfied, you can move on and spend your money elsewhere. If not, consider an extra intake fan or rear-mounted exhaust fan, depending on how many front fans your case supports.

You can bring temperatures down further with more fans, but you have to decide how much you’re willing to spend. For example: is a two degrees Celsius drop in GPU temperatures worth the four or five intake fans you might need to buy? Only you can answer that question. If you’re keen on testing that out, check out our best case fans list for some suggestions. All the best! 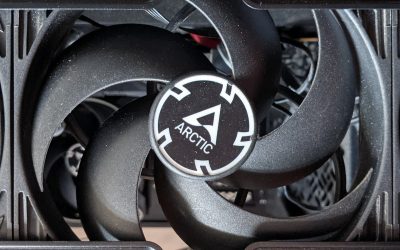 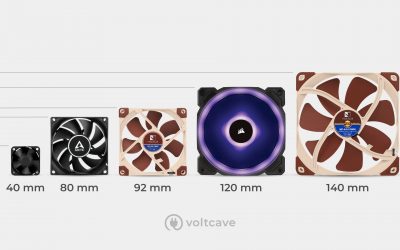