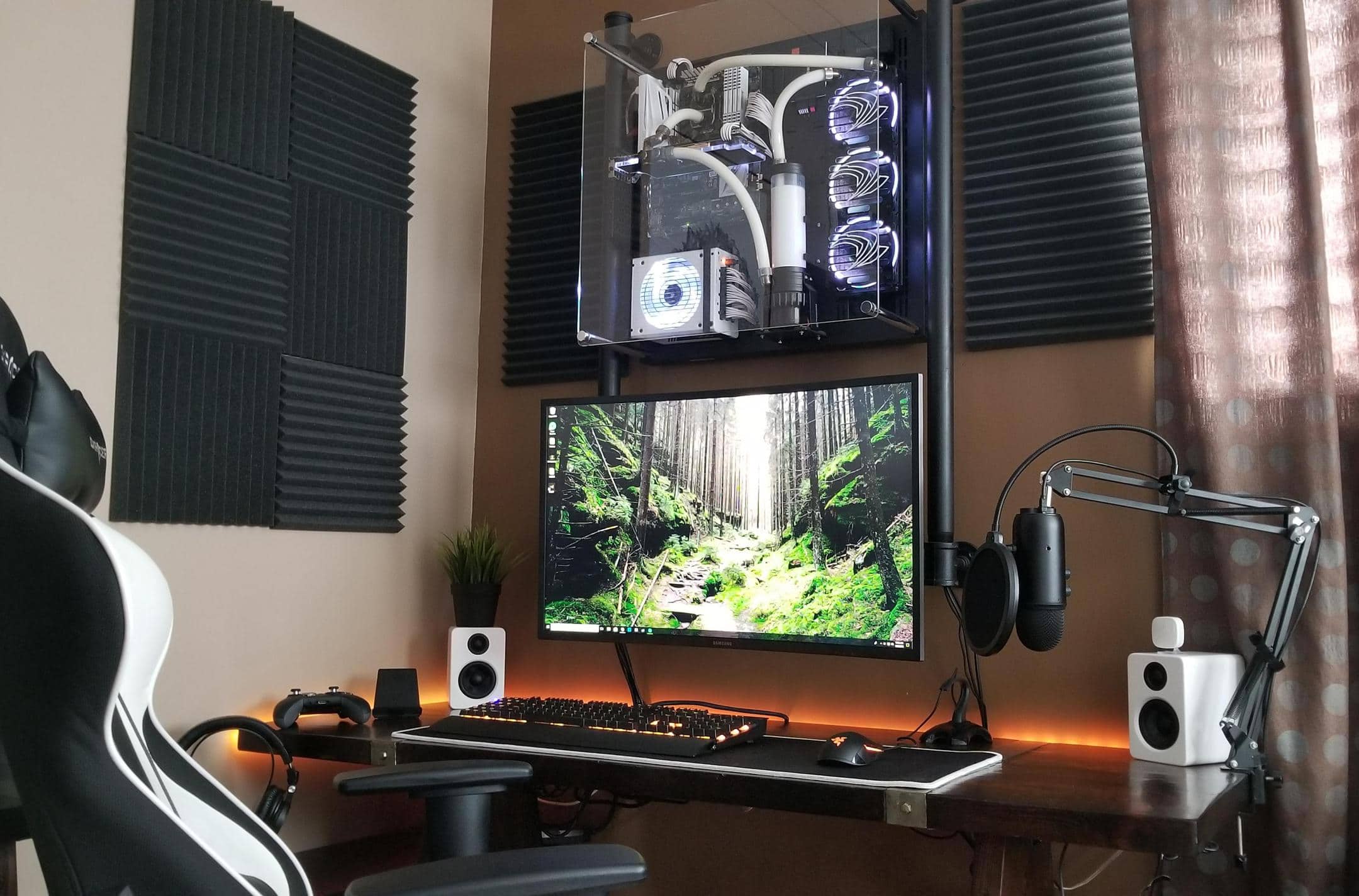 Your PC can be so much more than a plain old tower. From portable cases with handles to space-saving horizontal layouts, there’s probably a case out there for you no matter your desire. But in terms of visual flair, there’s nothing quite as eye-catching as an open air PC case.

The best open air cases make great use of tempered glass and exposed frames to provide an excellent platform for top-notch showcase rigs. If you’re looking to take your build to the next level, read on to see if there’s an open PC case for you.

Before we head into our picks, remember that building in an open air case will make dust an even bigger problem for your PC. This won’t be a massive problem for custom water-cooled builds, but it will definitely be something you have to consider if you want to use air cooling.

If you do want to air-cool your PC, we recommend a regular cleaning and dusting routine to keep your components looking and performing their best. Now that we’ve got that out of the way, let’s continue on to our picks. 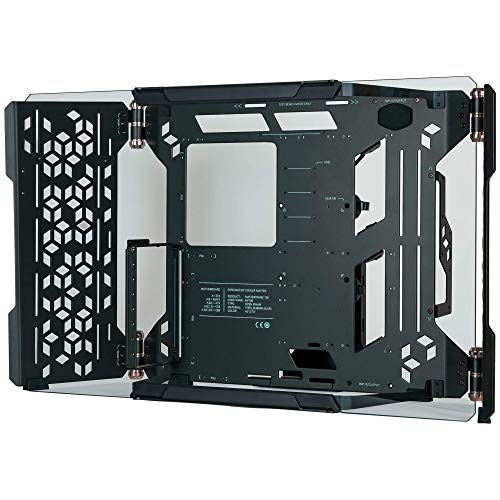 The MasterFrame 700 made its debut at Cooler Master’s showcase event earlier this year. The MasterFrame 700’s unique design consists of a central motherboard tray flanked by two “wings” attached to the tray with high-quality hinges, all behind an oversized tempered glass panel. 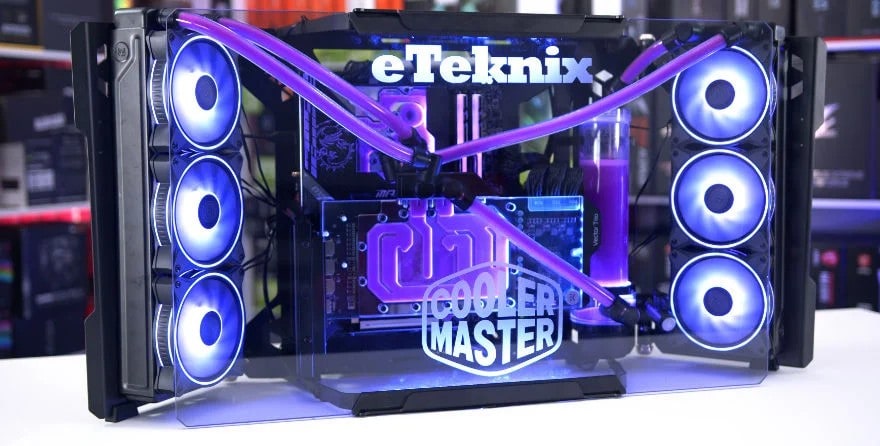 The MasterFrame 700’s party trick is its ability to transform from an open air PC case into a test bench. The tempered glass panel can be removed, allowing its support arms to flip backward behind the motherboard tray. You can then position the case horizontally in a traditional test bench layout. 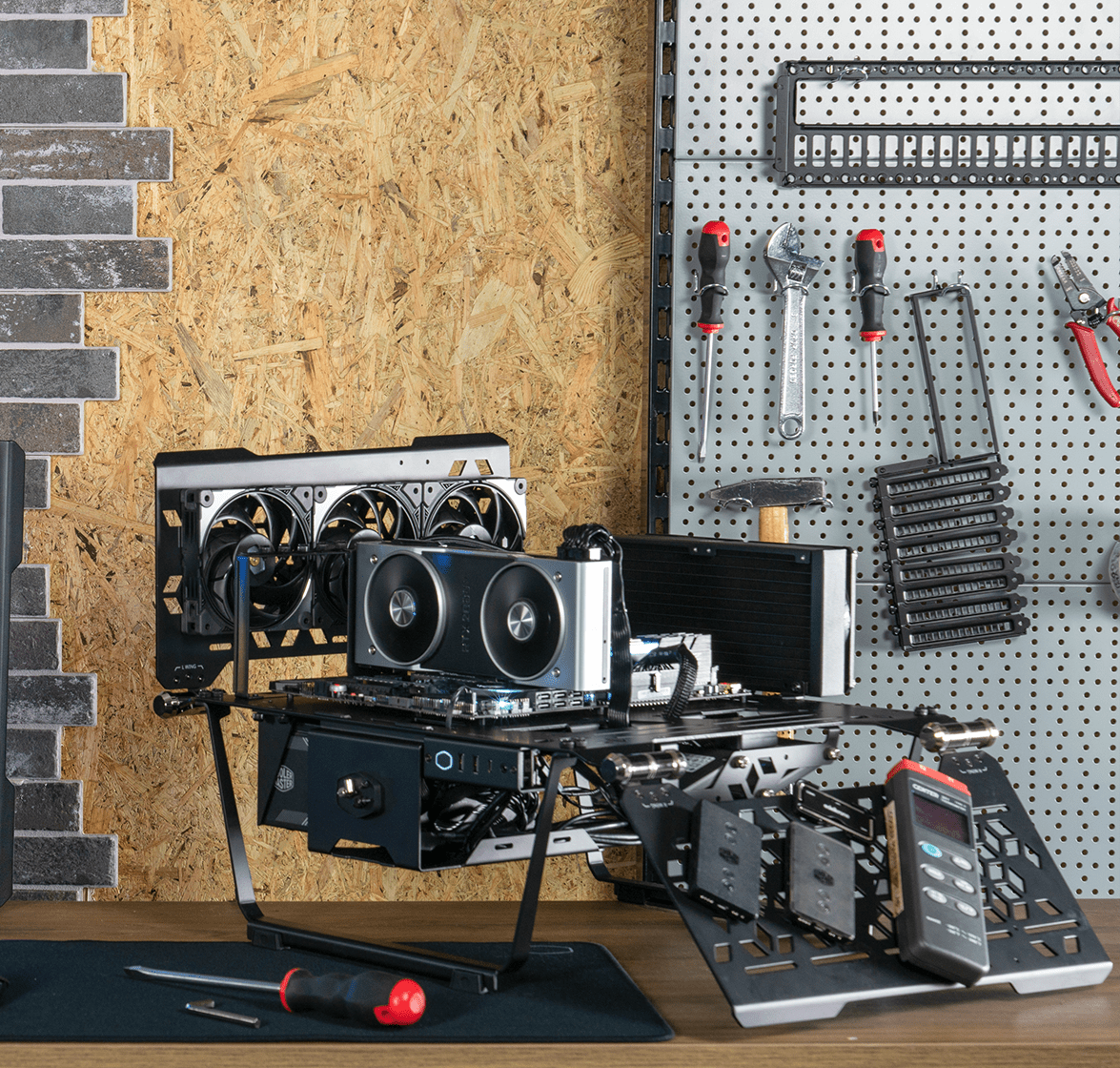 The MasterFrame 700’s three parts were designed to come apart easily, making painting or wrapping the panels relatively straightforward. Mod-friendliness is something you’re going to see with most of the cases on this list.

It’s great to see Cooler Master get in on the open air PC case action with what looks to be an excellent first offering. It has all the right features to compete with Thermaltake’s higher-end Core cases, and its ability to convert into a premium test bench is the icing on the cake. 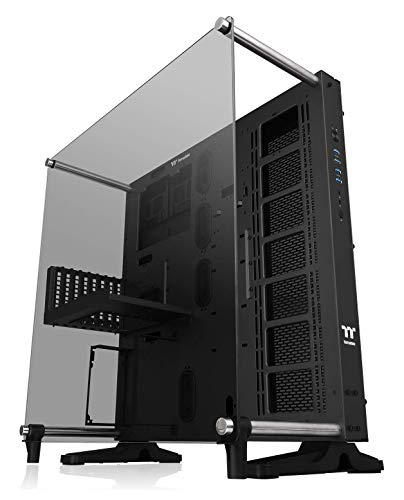 It wouldn’t be an open air PC case list without one of Thermaltake’s Core-series cases. With their tempered glass panels and completely open sides, these cases arguably defined the whole notion of a showcase, open air computer.

The company makes a whole range of Core cases, from the mini ITX Core P1 to the massive Core P90. The one we’ve chosen to feature here is the Core P5, which is the company’s mid-range ATX case.

One of the big appeals of Thermaltake’s Core P5 is its support for vertical, horizontal, and wall-mounted orientations. No matter your living situation, you’ll probably be able to find a great way to fit the P5 into it. 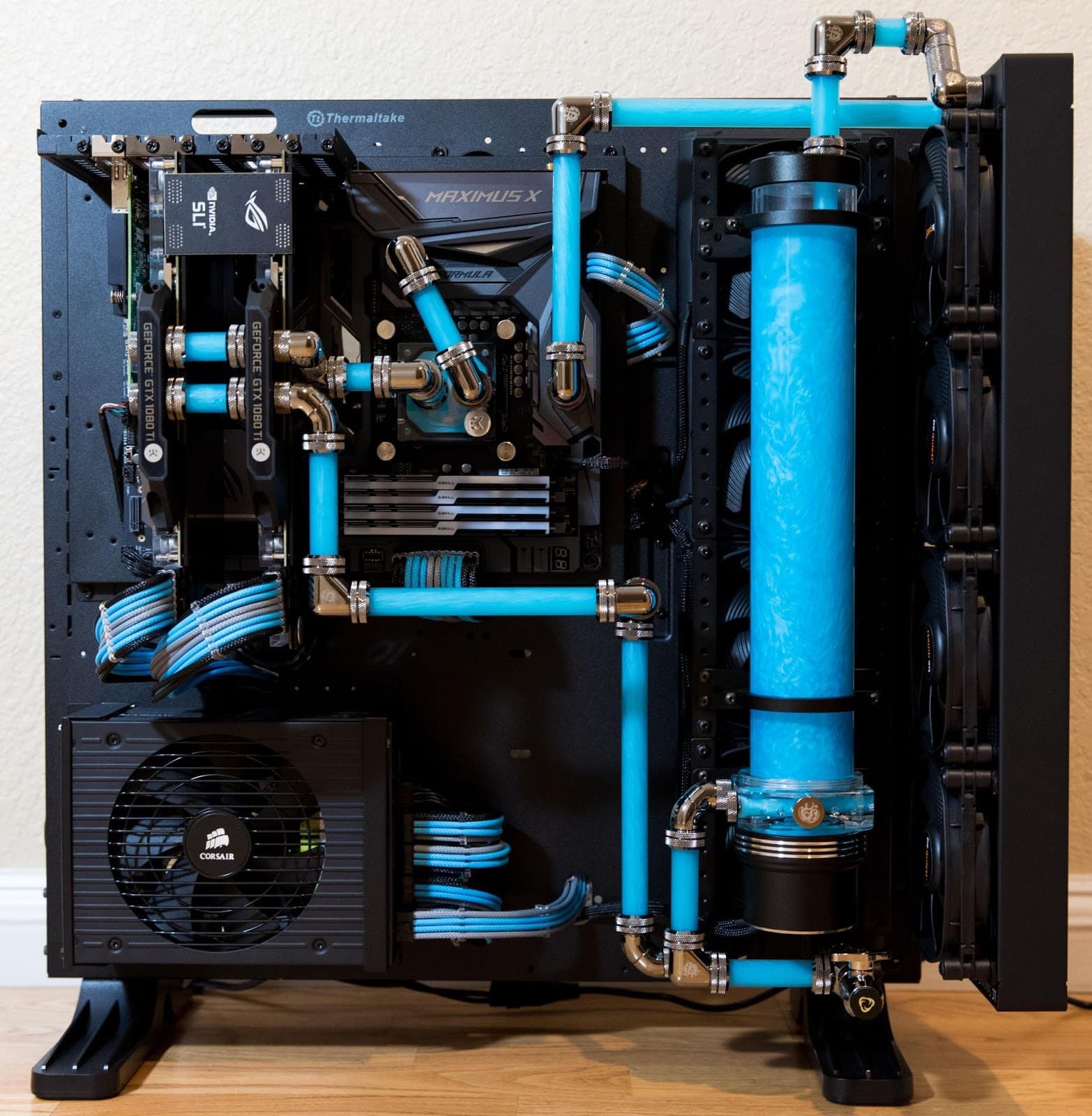 Thermaltake really made sure you have a lot of options when building in the Core P5. Beyond its support for three orientations, you can also choose to install your motherboard either vertically or horizontally.

The Core P5 is built on Thermaltake’s “Dismantlable Modular Design” philosophy to make assembly a breeze with modular panels, brackets, and case elements. The company even provides 3D printer files for optional parts like reservoir mounts on their 3D Makers site. 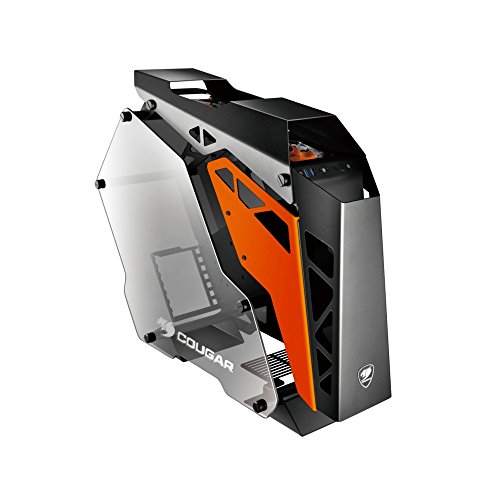 If there was ever an open air case that absolutely screams “gamer,” then the is it. To our eyes, it looks like a cross between a superbike and something out of Transformers; like it or not, it’s definitely memorable.

The Cougar’s combination of CNC-milled aluminum and tempered glass side panels is somewhat modular and was designed with modding in mind. Many of the aluminum parts come away from the core frame for modifications or painting. This makes the Conquer a perfect canvas for clever styling, like Robeytech’s McLaren Senna-themed build: 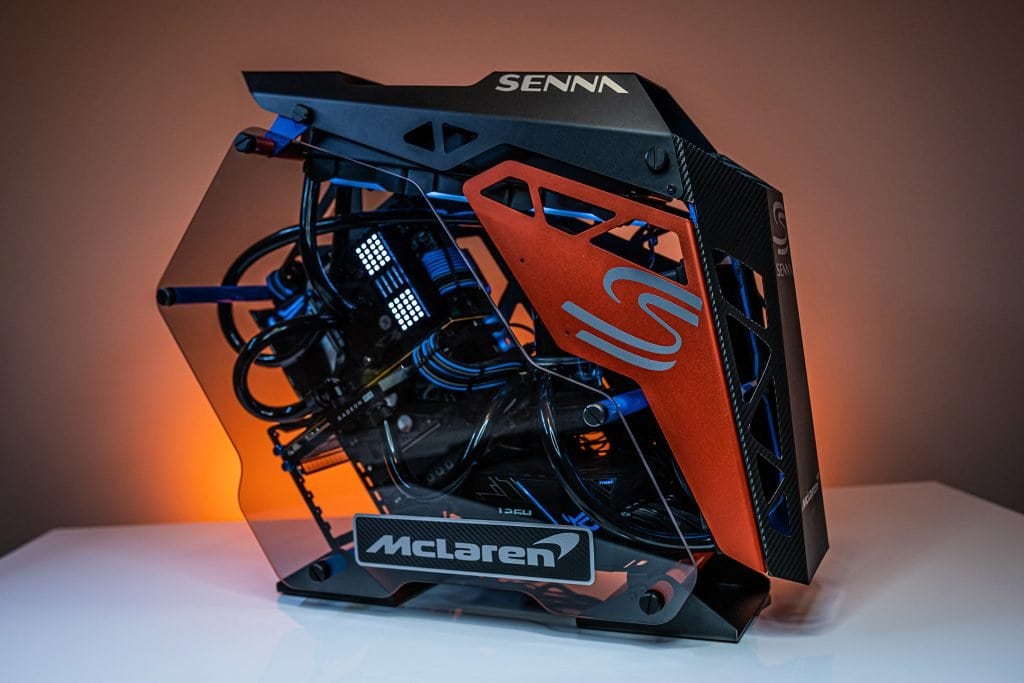 Still, that won’t be a problem for most people, so it’s hard to really consider that a negative. All in all, despite being a few years old now, the is still quite a unique open air case that’ll make your build stand out from the crowd. The last couple of years have seen a new competitor enter the market, though, which we’ll discuss right after this. 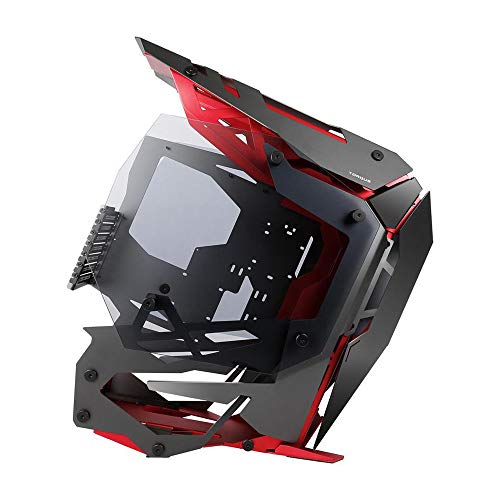 It took a while, but Antec finally decided to muscle in on the “Transformers-meets-superbike” open air PC case market in 2019 with the Antec Torque. The company’s definitely taken a page out of Cougar’s playbook with the Torque, down to its exposed CNC-milled aluminum frame and thick tempered glass side panels.

Like the Conquer, the Antec Torque also has a semi-modular design with panels that come away from the central frame. This should make it an equally good canvas for modding and custom paint jobs, like in the build by Customrigs De shown below. 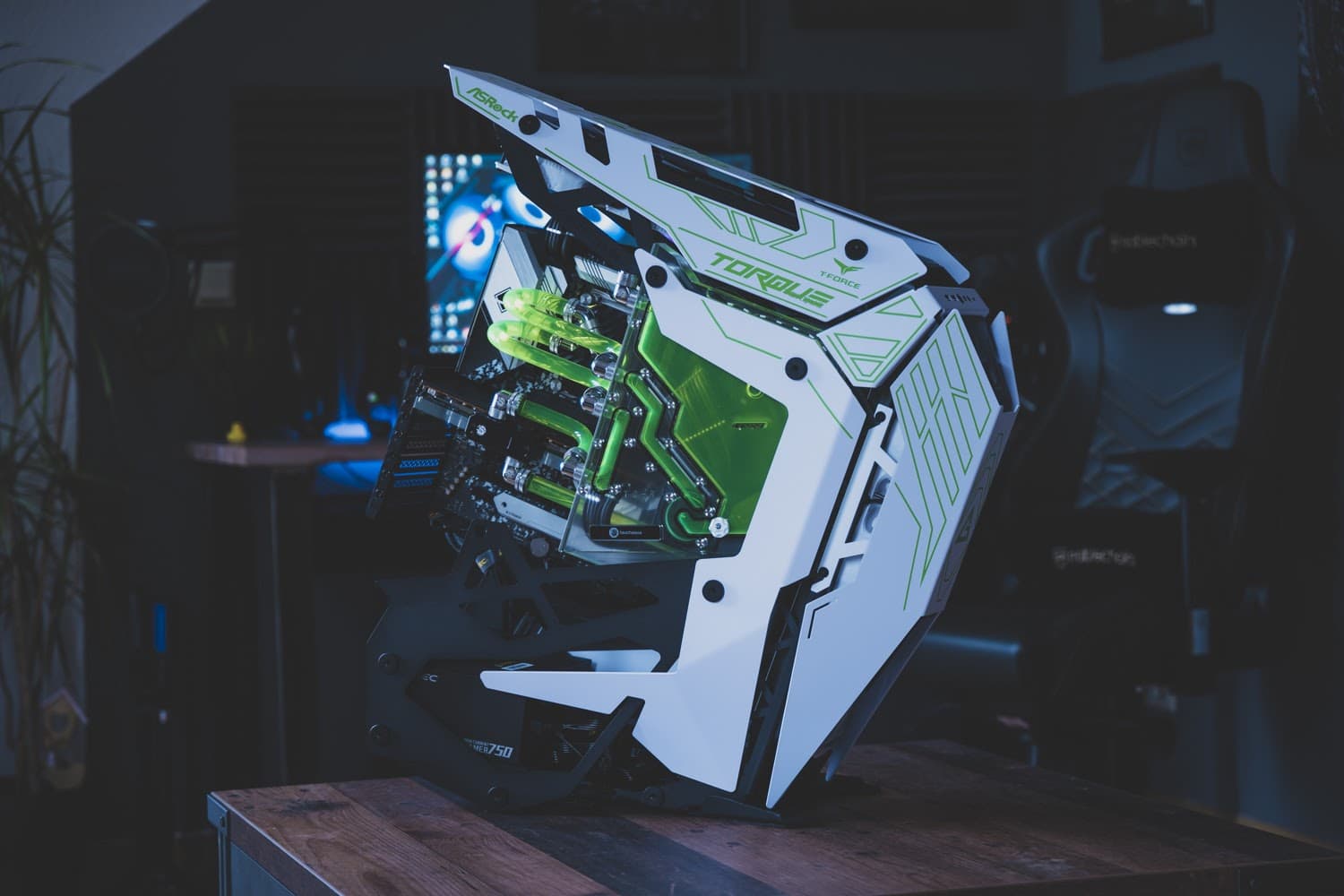 Antec may have drawn a lot of inspiration from the , but they’ve somewhat improved on the design. Given the slightly taller and wider dimensions, it’s no surprise that the Torque adds support for E-ATX motherboards up to 12”x11”. It also supports longer GPUs and taller CPU coolers.

The Torque also has a slight edge on cooling, supporting 360 mm radiators in both the top and front of the case. This improved compatibility comes with a downside, though, and that’s the lack of drive bays.

The Torque only has only one bay each for 3.5- and 2.5-inch drives. The popularity of m.2 SSDs makes that less of an issue, but it’s something to be aware of if you need the storage. 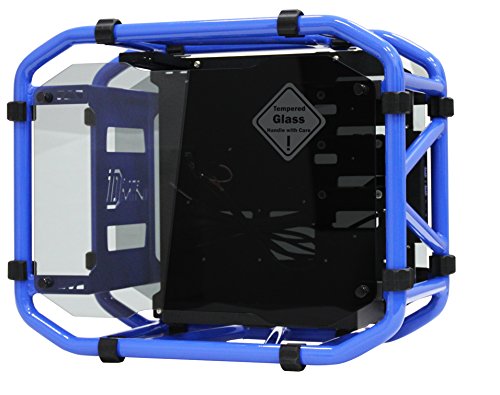 If there’s a market that’s not served very well by open air cases, it’s the mini ITX crowd. But trust InWin, maker of minute cases like the B1 and A1, to have a mini ITX version of their much-loved D Frame chassis.

The InWin D Frame Mini is an open frame PC case heavily influenced by motorbike frames, particularly Ducati bikes. In fact, that’s why it’s called the “D”-Frame. The frame is hand-welded and has rubber grommets all around to serve as feet and spacers for the tempered glass side panels.

A positive side effect of the open frame layout is that the D Frame Mini works in multiple orientations. You can have it sitting in the “normal” direction like in the photo below, but it’ll work equally fine horizontally or even vertically. 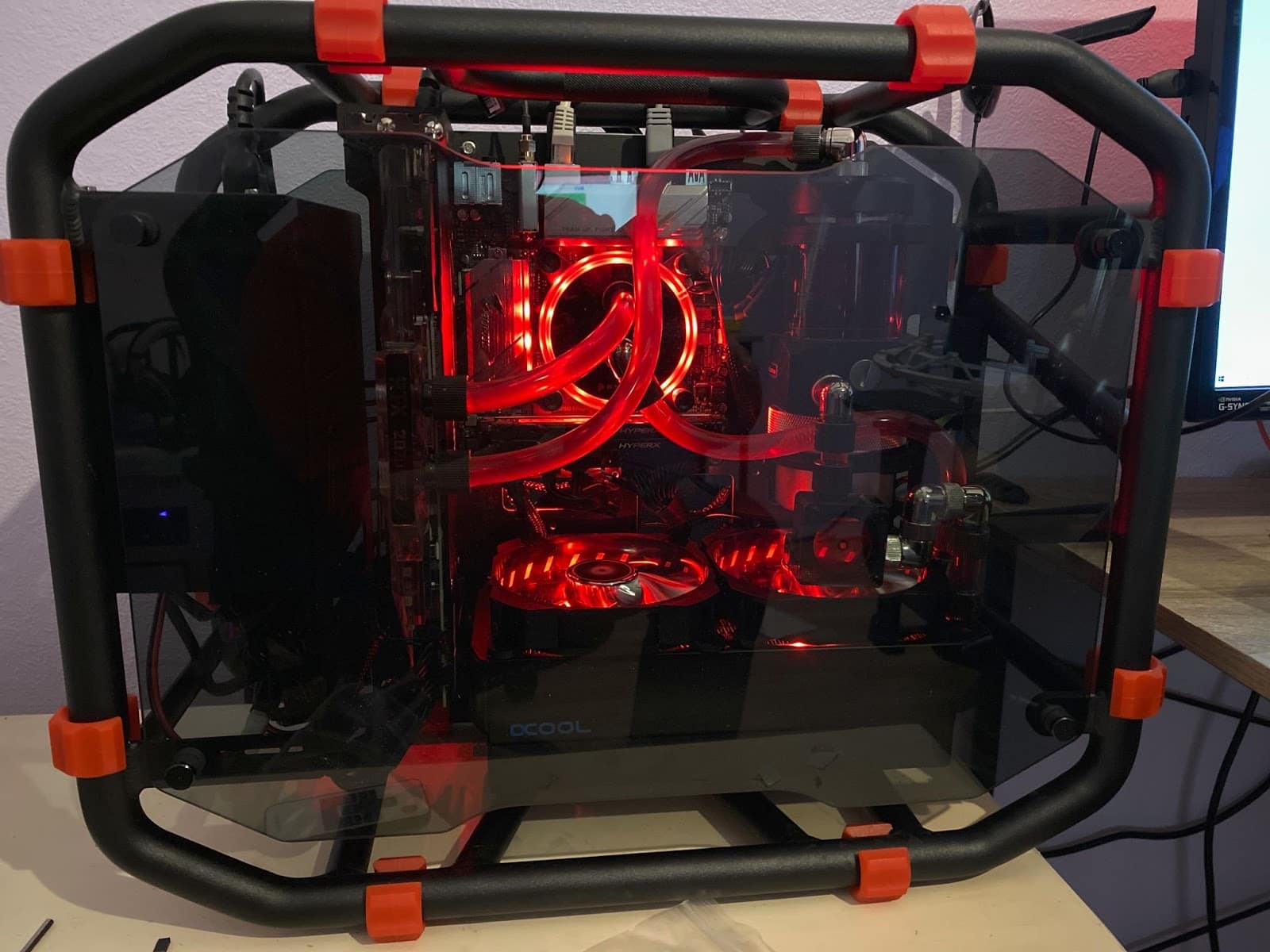 There isn’t much to the D Frame Mini beyond that aluminum frame. It doesn’t have any fancy layout options or modular features. In that sense, it’s not quite as exciting as some of our other picks. However, we think it’s definitely one of the best-looking cases on our list.

It’s worth noting that InWin has discontinued the D Frame Mini once before, so we’d suggest you scoop one up quickly if you’re interested in it. If you like the idea of an open air Mini ITX case but can’t get a hold of the D Frame Mini, Thermaltake’s Core P1 is your best bet.

Something In The Air…

There are really two types of open air cases. In one corner, you have the slightly more conventional offerings from Cooler Master and Thermaltake. Their rectangular shapes, tempered glass, and versatile mounting options offer brilliant canvases to showcase your high-end parts and custom water-cooling loops.

In the other corner, cases like Cougar’s Conquest and InWin’s D Frame Mini are showcases on their own, with or without high-end internals. Their looks are divisive, but there’s no denying that they’re some of the most eye-catching cases you can build a rig in. There’s no outright winner here, and the best case is going to be the one you like the look of most. 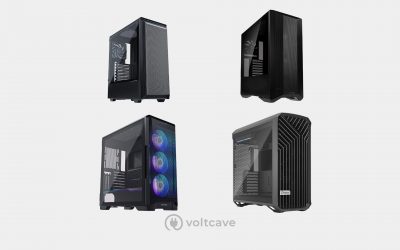 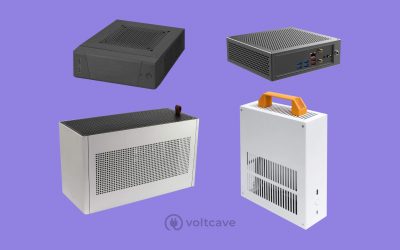 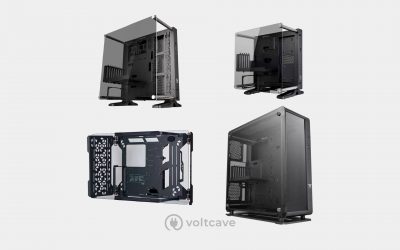